Alibaba has made an acquisition as it continues to square up to the opportunity in enterprise services in China and beyond, akin to what its US counterpart Amazon has done with AWS. TechCrunch has confirmed that the e-commerce and cloud services giant has acquired Teambition, a Microsoft- and Tencent-backed platform for coworkers to plan and collaborate on projects together, similar to Trello and Asana.

There were rumors of an acquisition circulating yesterday in Chinese media. Alibaba has now confirmed the acquisition to TechCrunch but declined to provide any other details.

Teambition had raised about $17 million in funding since 2013, with investors including Tencent, Microsoft, IDG Capital and Gobi Ventures. Gobi also manages investments on behalf of Alibaba, and that might have been one route to how the two became acquainted. Alibaba’s last acquisition in enterprise was German big data startup Data Artisans for $103 million.

As with others in the project management and collaboration space, Teambition provides users with mobile and desktop apps to interact with the service, and in addition to the main planning interface, there is one designed for CRM called Bingo, as well as a “knowledge base” where businesses can keep extra documentation and other collateral. 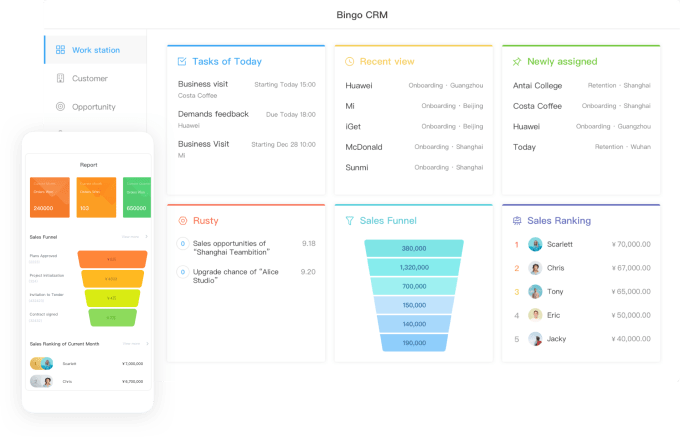 The deal is another sign of how Alibaba has been slowly building a business in enterprise powerhouse over the last several years as it races to keep its pole position in the Chinese market, as well as gain a stronger foothold in the wider Asian region and beyond.

In China alone, it has been estimated that enterprise services is a $1 billion opportunity, but with no clear leader at the moment across a range of verticals and segments that fall under that general umbrella, there is a lot to play for, and likely a lot more consolidation to come. (And it’s not the only one: Bytedance — more known for consumer services like TikTok — is rumored to be building a Slack competitor, and Tencent also has its sights on the sector, as does Baidu.)

As with AWS, Alibaba’s enterprise business stems out of the cloud-based infrastructure Alibaba has built for its own e-commerce powerhouse, which it has productised as a service for third parties that it calls Alibaba Cloud, which (like AWS) offers a range of cloud-storage and serving tiers to users.

On top of that, Alibaba has been building and integrating a number of apps and other services that leverage that cloud infrastructure, providing more stickiness for the core service as well as the potential for developing further revenue streams with customers.

These apps and services range from the recently-launched “A100” business transformation initiative, where Alibaba proposes working with large companies to digitise and modernize (and help run) their IT backends; through to specific products, such as Alibaba’s Slack competitor DingTalk.

With Alibaba declining to give us any details beyond a confirmation of the acquisition, and Teambition not returning our requests for comment, our best guess is that this app could be a fit in either of areas. That is to say, one option for Alibaba would be to integrate it and use it as part of a wider “business transformation” and modernization offering, or as a standalone product, as it currently exists.

Teambition today counts a number of Chinese giants, and giants with Chinese outposts, as customers, including Huawei, Xiaomi, TCL, and McDonalds in its customer list. The company currently has nothing on its site indicating an acquisition or any notices regarding future services, so it seems to be business as usual for now.

The opportunity around collaboration and workplace communication has become a very hot area in the last few years, spurred by the general growth of social media in the consumer market and people in business environments wanting to bring in the same kinds of tools to help them get work done. Planning and project management — the area that Teambition and its competitors address — is considered a key pillar in the wider collaboration space alongside cloud services to store and serve files and real-time communication services.

Slack, which is now valued at over $7 billion, has said it’s filed paperwork for a public listing, while Asana is now valued at $1.5 billion, while Trello’s owner Atlassian now has a market cap of nearly $26 billion.