You might think that Anaplan CEO, Frank Calderoni would have had a few sleepless nights this week. His company picked a bad week to go public as market instability rocked tech stocks. Still he wasn’t worried, and today the company had by any measure a successful debut with the stock soaring up over 42 percent. As of 4 pm ET, it hit $24.18, up from the IPO price of $17. Not a bad way to launch your company. 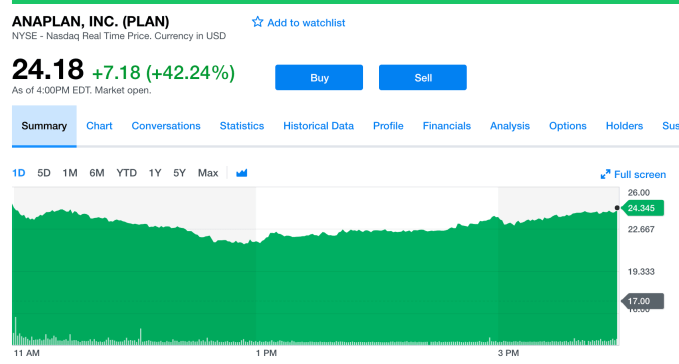 “I feel good because it really shows the quality of the company, the business model that we have and how we’ve been able to build a growing successful business, and I think it provides us with a tremendous amount of opportunity going forward,” Calderoni told TechCrunch.

Calderoni joined the company a couple of years ago, and seemed to emerge from Silicon Valley central casting as former CFO at Red Hat and Cisco along with stints at IBM and SanDisk. He said he has often wished that there were a tool around like Anaplan when he was in charge of a several thousand person planning operation at Cisco. He indicated that while they were successful, it could have been even more so with a tool like Anaplan.

“The planning phase has not had much change in in several decades. I’ve been part of it and I’ve dealt with a lot of the pain. And so having something like Anaplan, I see it’s really being a disrupter in the planning space because of the breadth of the platform that we have. And then it goes across organizations to sales, supply chain, HR and finance, and as we say, really connects the data, the people and the plan to make for better decision making as a result of all that,” he said.

Calderoni describes Anaplan as a planning and data analysis tool. In his previous jobs he says that he spent a ton of time just gathering data and making sure they had the right data, but precious little time on analysis. In his view Anaplan, lets companies concentrate more on the crucial analysis phase.

“Anaplan allows customers to really spend their time on what I call forward planning where they can start to run different scenarios and be much more predictive, and hopefully be able to, as we’ve seen a lot of our customers do, forecast more accurately,” he said.

Anaplan was founded in 2006 and raised almost $300 million along the way. It achieved a lofty valuation of $1.5 billion in its last round, which was $60 million in 2017. The company has just under 1000 customers including Del Monte, VMware, Box and United.

Calderoni says although the company has 40 percent of its business outside the US, there are plenty of markets left to conquer and they hope to use today’s cash infusion in part to continue to expand into a worldwide company.