As you look at the $34 billion IBM-Red Hat deal announced yesterday, if you follow the enterprise closely, it seems like a good move, at least on its face. It could be years before we understand the true value of it for IBM (or lack thereof, depending on how it ultimately goes). The questions stands then, is this a savvy move, a desperate one or perhaps a bit of both. It turns out, it depends on whom you ask.

For starters, there is the sheer amount of money involved, a 63 percent premium on Friday’s closing price of just under $117 a share. IBM spent $190 a share, but as Ray Wang, founder and chief analyst at Constellation Research said, Red Hat didn’t necessarily want to be sold, so IBM had to overpay to get their company.

Wang sees cloud, Linux and security as the big drivers on IBM’s part. “IBM is doubling down on the cloud, but they also are going for a grab in Linux for their largest and most important open source communities and some of the newer tech on Red Hat security,” he told TechCrunch. He acknowledges that it’s a huge premium for the stock, but he believes IBM needs the M&A action to drive down customer acquisition costs and drive up cross sell. 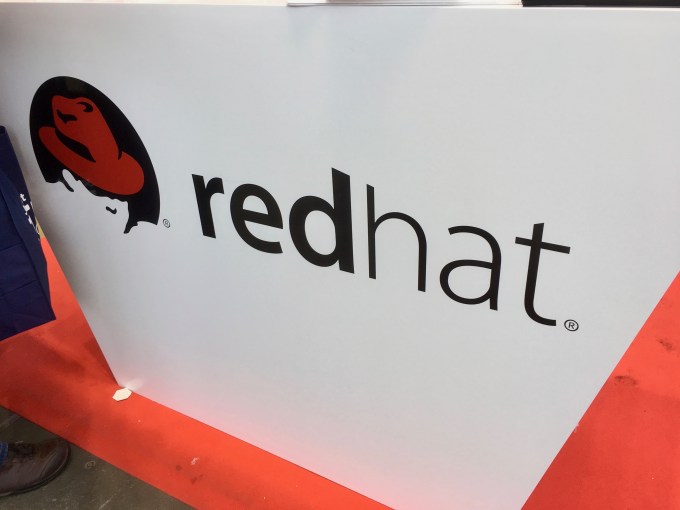 IBM is placing a big bet here says Dharmesh Thakker, general partner at Battery Ventures, believing it to be worth 30x its current earnings in the next 12 months. “Needless to say, the hybrid cloud opportunity that we have been working on the last few years, is real and IBM/Cisco/HP/Dell all want a piece of this action going forward as the $300B in datacenter spend gets dislocated by public and hybrid cloud vendors,” Thakker explained in a statement.

He believes this deal could actually trigger a new set of mega mergers between the traditional tech vendors and cloud native, container and DevOps companies over the next few months.

IBM CEO Ginni Rometty was positively giddy at the prospects of a combined IBM-Red Hat in a call with analysts and press this morning, pointing out that only 20 percent of enterprise workloads have been moved to the cloud. She sees a big opportunity, one she projects to be worth $1 trillion by 2020. Keeping in mind you should take market projections with a grain of salt, this is undoubtedly a big market and one that Oracle and Microsoft have also targeted.

She said that Red Hat was a rare company indeed. “Red Hat on its own has been a high value company and has done a great job with strong growth, is highly profitable and generates cash. There are not many companies out there that look like that in this area,” Rometty said. 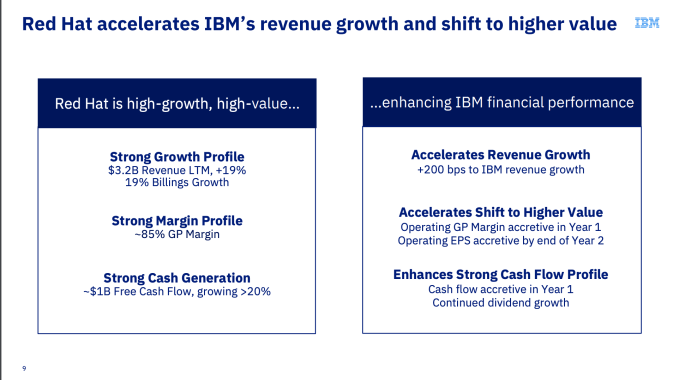 Dan Scholnick, general partner at Trinity Ventures, whose investments have included New Relic and Docker, was not terribly impressed with the deal, believing it smacked of desperation on IBM’s part.

“IBM is a declining business that somehow needs to become relevant in the cloud era. Red Hat is not the answer. Red Hat’s business centers around an operating system, which is a layer of the technology stack that has been completely commoditized by cloud. (If you use AWS, you can get Amazon’s OS for free, so why would you pay Red Hat?) Red Hat has NO story for cloud,” he claimed in a statement.

That might not be an entirely fair assessment. While Red Hat Enterprise Linux is a big part of the company’s revenue, it’s not the only piece. Over the last couple of years it has moved into Kubernetes and containerization and has grown the cloud native side of the business alongside RHEL.

In fact, Forrester analyst Dave Bartoletti sees the cloud native piece as being key here. “The combined company has a leading Kubernetes and container-based cloud-native development platform, and a much broader open source middleware and developer tools portfolio than either company separately. While any acquisition of this size will take time to play out, the combined company will be sure to reshape the open source and cloud platforms market for years to come,” he said.

Wang believes the deal could hinge on how long Red Hat CEO Jim Whitehurst, who had led the company for over a decade, stays with the unit. According to IBM, they will maintain the Red Hat brand and operate it as an independent entity inside Big Blue. “If Whitehurst doesn’t stick around for awhile, the deal could go south,” he said. But the company could dangle the CEO job when Rometty decides to leave as incentive to stay.

Regardless, Wall Street was not entirely happy with IBM’s move with their stock down all day. Needless to say the 63 percent premium IBM paid for the stock has driven Red Hat higher today.

The deal must pass shareholder muster, but given the premium IBM has offered, it’s hard to believe they would turn it down. In addition, since these companies operate across the world, they are subject to the global regulatory approval process. They won’t officially come together until at least the second half of next year at the soonest. That’s when we might begin to learn whether this was a brilliant or desperate move by IBM.