Color is looking to add a new test to its line of genetic testing, this time focusing on hereditary factors that may affect a person’s chance for being prone to cardiovascular complications like arrhythmia and cardiomyopathy.

Called the heart health test, Color’s new test looks to isolate the genes that can be partially responsible for heart-related conditions that may have a hereditary component. Color says the test analyzes 30 genes that contribute to the structure and rhythm of a healthy heart to determine if there may be any hereditary factors that could lead to heart complications down the line. VP of clinical operations Scott Topper acknowledged that hereditary factors certainly aren’t the only factors that might play into cardiovascular complications like arrhythmia, but there has been enough research to show that the potential hereditary genetic components that lead to those conditions is impactful enough to warrant building a test for those markers.

“Some of these conditions are relatively rare, and for most of them we expect the actual incidence to be about 1 in 200,” Topper said. “But what that means is, if we handle 1,000 people this week, we expect 5 of them to be affected by this. For those 5, the consequences of it going undetected, can be as extreme as sudden death. While though they’re rare, they incredibly impactful. It’s not a 100% predictive — For BRCA for example, we know that a woman who has a BRCA mutation has about an 80% chance of getting breast cancer in their lifetime and getting again and again. It’s not 100%, but it’s a profound enough likelihood that many people decide to take action.”

Color looks to target genes that the American College of Medical Genetics and Genomics identified as high-impact and actionable. The end product is to see, if there is a mutation in one of those genes, there may be a possibility that the person is at higher risk for cardiovascular problems like cardiomyopathy or arrhythmia. There isn’t full penetrance — just like there isn’t in the BRCA test — so it’s more of a ‘heads up, go get it checked out just in case’ situation.

Color, previously Color Genomics, is one of a few well-funded genetic testing startups that aim to make it easier for consumers to get tested for potential complications down the line where they can take some preventative steps. In the case of this test, the goal is to flag any potential risk and then have them follow up with clinicians to determine if there are any lifestyle changes that need to happen. Consumers take a swab of saliva and send off the test — either for a few hundred bucks, or through a program that some employers are putting in place. Color raised $80 million in a financing round in August last year.

The latter part of that, employers getting into issuing these tests for their employees, is going to be increasingly important for Color. Catching diseases early helps reduce the overall cost to employers before more problems occur. While Color has largely focused on the cancer space with tests for detecting genes that are associated with higher risk of breast cancer, it started branching into tests for potential cardiovascular problems like Hypercholesterolemia. That test, launched in August last year, costs $249 for a direct purchase for a consumer. 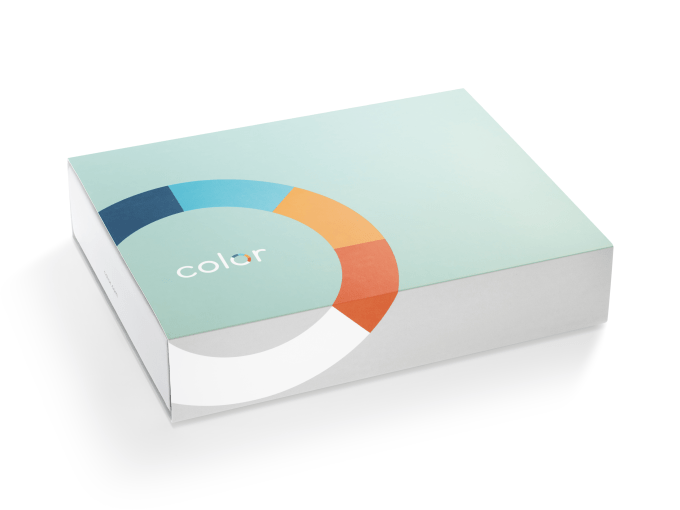 To be sure, the average customer is giving up their genetic data in order to get tested for these potential hereditary conditions, a password that you’ll (probably) never be able to change. As more and more of these tests become available, there’s a good chance it’ll attract a new segment of customers — those that are looking to head off complications based on what’s happened to family members, or even those who are just curious about whether or not they have risk. Topper said many at Color come from a tech-native background from companies like Google, Twitter, and Dropbox, and it’s something that’s perpetually top-of-mind. (Though, to be sure, it’s a very tall order.)

“We’ve put a good deal of effort on the back-end informatics side to make sure our systems are very developed and robust,” Topper said. “It’s not something that comes easy, I think a lot of health companies back into this and realize after the fact that there’s a substantial computer engineering aspect to being able to do this responsibly”

There is still a lot of activity in this space, including at the actual financing level. 23andMe, another genetic testing startup, raised $250 million in new financing last year. And as the research matures, it’s always possible that other companies may want to branch into a similar area — finding spots that might represent some risk for heart conditions. Topper said the company still expects to continue to look for examples where the condition affects a lot of people and that some portion is driven by genetics, and that a lot of players in the space is generally going to be a good thing simply because it will help further the progress on that front.

“We are living in good times for genetics, primarily because of a number of really important consensus-driven efforts around looking at the clinical validity and clinical utility of genetic information,” he said. “None of this happens in a silo. Being able to both move the field forward in terms of making information available and gleaning knowledge, as well as being a good citizen in a space that’s moving quickly, are both very important to us. I feel like there’s a cultural change in terms of where genetics fits into our society. As long as other companies are doing it responsibly, it’s also good.”