Logtrust is now known as Devo in one of the cooler name changes I’ve seen in a long time. Whether they intended to pay homage to the late 70s band is not clear, but investors probably didn’t care, as they gave the data operations startup a bushel of money today.

The company now known as Devo announced a $25 million Series C round led by Insight Venture Partners with participation from Kibo Ventures. Today’s investment brings the total raised to $71 million.

The company changed its name because it was about much more than logs, according to CEO Walter Scott. It offers a cloud service that allows customers to stream massive amounts of data — think terabytes or even petabytes — relieving the need to worry about all of the scaling and hardware requirements processing this amount of data would require. That could be from logs from web servers, security data from firewalls or transactions taking place on backend systems, as some examples.

The data can live on prem if required, but the processing always gets done in the cloud to provide for the scaling needs. Scott says this is about giving companies this ability to process and understand massive amounts of data that previously was only in reach of web scale companies like Google, Facebook or Amazon.

But it involves more than simply collecting the data. “It’s the combination of us being able to collect all of that data together with running analytics on top of it all in a unified platform, then allowing a very broad spectrum of the business [to make use of it],” Scott explained. 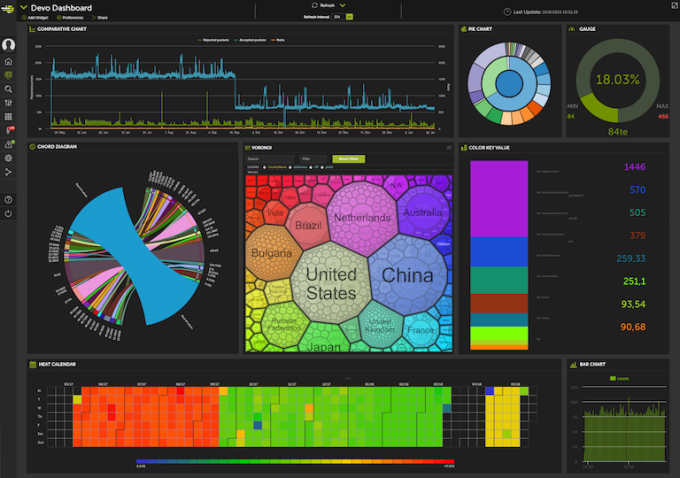 Devo sees Sumo Logic, Elastic and Splunk as its primary competitors in this space, but like many startups they often battle companies trying to build their own systems as well, a difficult approach for any company to take when you are dealing with this amount of data.

The company, which was founded in Spain is now based in Cambridge, Massachusetts, and has close to 100 employees. Scott says he has the budget to double that by the end of the year, although he’s not sure they will be able to hire that many people that rapidly