Docpack is offering businesses a simple way to share their documents — particularly with customers at large enterprises that may block services like Dropbox or Google Drive.

Founder and CEO Rurik Bradbury said he encountered this issue while serving as the head of conversational strategy at LivePerson (he’s also been as an executive and/or co-founder at Trustev and Unison Technologies, and he oeprates operating the beloved Prof Jeff Jarviss parody account). Many of the largest companies that LivePerson was working with just wouldn’t accept file-sharing links, so “we had to print out things and FedEx things” — and in at least one case, ship Android tablets pre-loaded with documents.

Apparently this is a broader issue, with research suggesting that services like Box, Dropbox and Google Drive remain among the most blacklisted apps by enterprise IT departments.

In particular, Bradbury said companies are worried about “full, two-way file sharing,” so he found a way around it by “building these microsites for each company,” where someone could download documents. From the IT perspective, they just regular websites, with no capabilities for employees to share documents back, so they stayed off the blacklists.

The problem with microsites, however, is that they’re “not scalable.” So with Docpack, Bradbury aims to make it quick and easy to create them for a wide range of clients. He compared his approach to website builders like Wix and Squarespace, “Where you can make a website even if you’re not technical.” 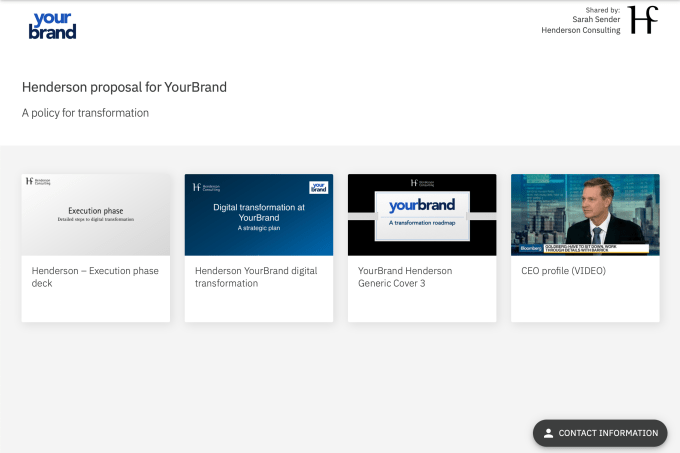 Similarly, it should only take Docpack users a few clicks to create a new microsite, add customized branding and upload documents. These documents can be protected with security that limits access to users with a specific company email domain, and the publisher can also track which documents are actually getting downloaded.

Docpack has raised less than $500,000 in funding from Asian accelerator Zeroth, Trustev founder Pat Phelan and other individuals.

The startup’s standard plan costs $10 per seat. Bradbury suggested that the service could be useful across sales, business development and marketing: “There’s a huge amount of business transacted via document-sharing.” He also suggested that PR professionals and journalists could use it to share documents, and he’s offering free accounts for credentialed journalists.

As for competition from the big file-sharing services, Bradbury suggested that as they try to accommodate enterprise needs, they’re creating “a product that’s stretched out, that was not really designed at all for cross-company sharing.”

“This is a big enough space … that it deserves its own thing,” he added.