As Dropbox looks to woo larger and larger businesses with its strategy of building simpler collaboration tools than what’s on the market, it’s making some moves in its online document tool Paper to further reduce that friction today.

Dropbox said it was rolling out a new tool for Dropbox Paper that allows users to get a paper document up and running through a set of templates. It may seem like something that would be table stakes for a company looking to create an online document tool like Google Docs, but figuring out what Paper’s core use cases look like can take a lot of thinking and user research before finally pulling the trigger. Dropbox at its heart hopes to have a consumer feel for its products, so preserving that as it looks to build more robust tools presents a bigger challenge for the freshly-public company. 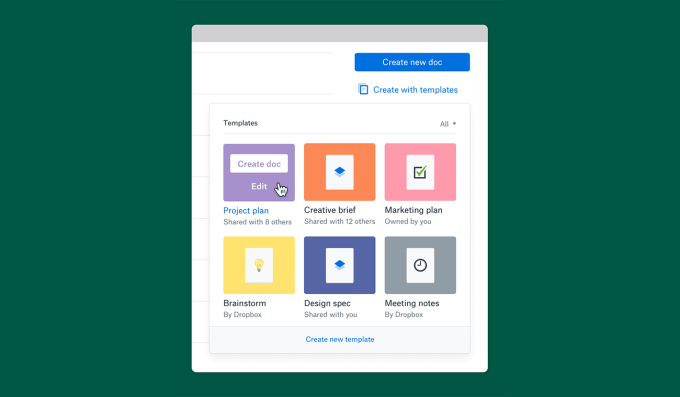 The templates tool behaves pretty much like other tools out there: you open Dropbox Paper, and you’ll get the option to create a document from a number of templates. Some common use cases for Dropbox Paper include continuous product development timelines and design specs, but it seems the company hopes to broaden that by continuing to integrate new features like document previews. Dropbox Paper started off as a blank slate, but given the number of options out there, it has to figure out a way to differentiate itself eventually.

The company said it’s also rolling out a number of other small features. That includes a way to pin documents, launch presentations, format text and insert docs and stickers. There’s also a new meeting widget and increased formatting options in the comments section in Paper. Finally, it’s adding a number of small quality-of-life updates like viewing recent Paper docs by alphabetical order and the ability to unsubscribe to comment notifications and archive docs on iOS, as well as aggregating to-do lists across docs.

Dropbox went public earlier this year to dramatic success, immediately getting that desired “pop” and more or less holding it throughout the past month or so as one of the first blockbuster IPOs of 2018. There have been a wave that have followed since, including DocuSign, and it’s one of a batch of several enterprise companies looking to get out the door now that it appears the window is open for investor demand for fresh IPOs.

Paper, to that end, appears to be a key piece of the puzzle for Dropbox. The company has always sought to be a company centered around simple collaboration tools, coming from its roots as a consumer company to start. It’s an approach that has served it — and others, like Slack — well as the company looks to expand more and more into larger enterprises. While it’s been able to snap up users thanks to its simpler approach, those enterprise deals are always more lucrative and serve as a stronger business line for Dropbox.

Dropbox will have to continue to not only differentiate itself from Google Docs and other tools, but also an emerging class of startups that’s looking to figure out ways to snap up some of the core use cases of online document tools. Slite, for example, hopes to capture the internal wiki and note-taking portion of an online doc system like Google Docs. That startup raised $4.4 million earlier this month. There’s also Coda, a startup that’s looking to rethink what a document looks altogether, which raised $60 million. Templates are one way of reducing that friction and keeping it feeling like a simple document tool and hopefully getting larger businesses excited about its products.