When you’re working in a key business tool like Slack or Salesforce, you don’t want to switch focus by opening up another application to pull additional information. Evernote Business has let you access Evernote content from these applications for some time, and today it announced some refinements to enhance those integrations.

The Slack integration had worked with the old slash commands to display Evernote content directly within Slack, but Slack has changed that to allow you to access applications like Evernote in a more visual way, says Eric Wrobel, chief product officer at Evernote.

“Earlier this year, Slack announced something called Slack Actions. It allows you to surface an application in a more visual way, so discoverability and ease of use is better to reduce friction,” he said. 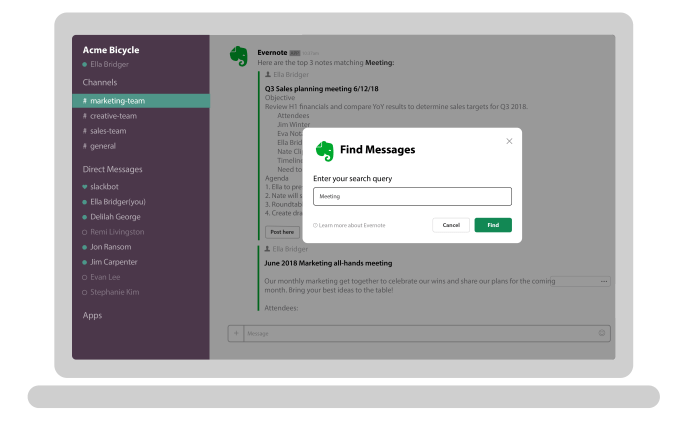 Evernote has take advantage of this new capability in this release to get away from the command interface style that Slack had previously used and make it easier for their core knowledge workers to access Evernote content inside of Slack.

Users can take an Evernote note in Slack, which will then show up in Evernote automatically in a “Notes from Slack” folder. From there, users can edit the notes and move them to other folders (or tag them) to further organize them in any way they see fit. Similarly you can save a conversation you’re having in Slack to Evernote as a note and move it or edit from Evernote later on.

While Salesforce deals with structured systems of record, Evernote works with unstructured content and bringing the two together can be useful and powerful for users. Typically, a team member interacting with the customer on the phone or in the field, will take notes in Evernote, and they want to share that information with other members of the team in the Salesforce record, Wrobel explained.

The user who took the note can link one or more notes inside Salesforce, so they essentially become part of the customer record. The newer version improves the technical connections between the two cloud applications including the ability to “pin” a note to a record. What’s more, once a note is linked there is two-way sync, which means regardless of whether you change that note in Salesforce or Evernote, it will update in both places (because the integration is a live version of Evernote). 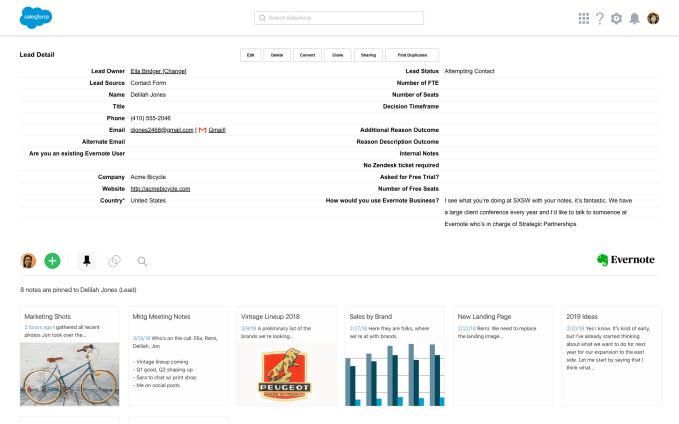 Evernote also surfaces related content automatically at the bottom of the customer record to help users find other Evernote subject matter connected to the record. While you can’t link a note to Salesforce directly from Evernote yet, that is a requested feature and Wrobel said they are working on it for a future release.

These updates are available today for Slack and Salesforce customers using Evernote Business.