There are better employee perks than a ping-pong table. 70 percent of Americans graduate college with student loan debt. That’s 45 million people who owe $1.6 trillion. So when employers use Goodly to offer $100 per month in student loan payback for a $6 fee, talent sticks around. The startup found 86 percent of employees said they’d stay with a company for at least five years if their employer helped pay down their student loans. Yet employers break even if workers stay just two extra months, and get a 5X return if they stay an extra year since it costs so much to hire and train replacement staff.

Now, Y Combinator-backed Goodly has raised a $1.3 million seed round led by Norwest. The startup hopes capitalize on corporate America waking up to student loan payback as a benefit, which is expected grow from being offered by 4 percent of companies today to 32 percent by 2021.

Goodly co-founder and CEO Greg Poulin knows the student loan crisis personally. “When I was in school, my father passed away very unexpectedly due to a heart attack. I had to borrow $80,000 to for college at Dartmouth” he tells me. His monthly payment is now $900. The stress that debt creates can poison the rest of life. He says 21 percent of employees with student loan debt have delayed marriage, 28 percent have put off starting a family, and 1 out of 8 divorces is now directly attributed to student loan debt. “I’ve seen first-hand how challenging it is for employees to save for retirement or start a family” when they’re strapped with debt, Poulin says.

He met his co-founder and CTO Hemant Verma when they started working at Zenefits’ founder Parker Conrad’s new employee onboarding startup Rippling in 2017. That tought them how simplifying the benefits sign-up process could become its own business. Typically it requires that benefits be integrated with a company’s financial software like payroll and be set up with proper provisioning access. It’s enough of a chore that companies don’t go to the trouble of offering student loan repayment. 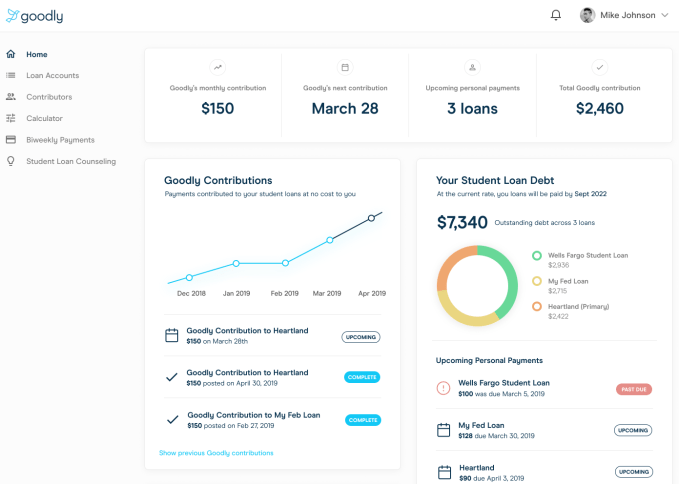 Poulin and Hemant started Goodly to create a “set it and forget it” system that automates everything. They charge $6 per month per participating employee and typically see adoption by 30 percent to 40 percent of employees. Rather than help with their monthly payment that includes interest, Goodly clients pay down their employees’ core debt so they can escape more quickly. Employees get a dashboard where they can track their debt and all of the contributions their company has made. Goodly hasn’t had a single customer churn since launch, demonstrating how badly employers want to keep job-hopping talent in their roles.

“We found that our people put off contributing to their 401Ks and buying a house because of their student loan debt. We thought that offering a Student Loan Repayment Benefit would be a great low-cost and high-impact benefit to attract and retain talent while alleviating some of the stress and the financial burden on our employees.” says Kim Alessi, an HR Generalist. 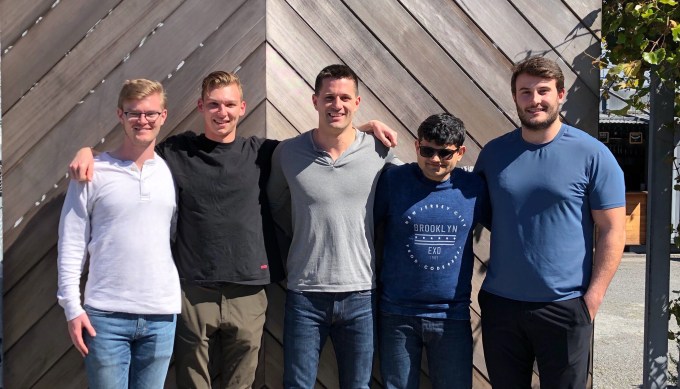 The business opportunity here is relatively young but there are a few competitors. Boston-based Gratify was acquired by First Republic, which Santa Monica’s Tuition.io pivoted to offering student loan benefits. But Goodly’s connection to so many potential clients plus its new funding could help it make student loan repayment a ubiquitous perk. Along with Norwest and YC, the funding comes from ACE & Company, Arab Angel, Zeno Ventures, and angel investors including Optimizely’s Pete Koomen, DreamHost’s Josh Jones, ShipStation’s Jason Hodges, Fairy’s Avlok Kohli, and Telly’s Mo Al Adham.

Beyond improving talent retention, Goodly may also help erase some of the systematic discrimination against minorities in our country. Women hold 66 percent of all student loan debt, black and Latinx Americans have 31 percent more student debt than their peers, and LGBTQ borrowers owe $16,000 more than an average member of the population. Convincing employers to address student loan debt could give everyone more freedom of choice when it comes to what they work on and how they live their lives.