Organizations today are sitting on mountains of data that they amass and use in their own businesses, but many are also looking to share those troves with other parties to expand their prospects — a model that comes with challenges (privacy and data protection being two key ones); and, these days (due to Covid-19 and the push to more digital transformation), with urgency; but also big rewards if you can pull it off well.

Today, a new London startup called Harbr, which has built a secure platform to enable big data exchange, is announcing a big round of funding to tap into that demand.

The company has raised $38.5 million in a Series A round of funding, just six months since emerging from stealth mode. It plans to use the money to hire more people to meet the demand of serving more enterprise customers, and for R&D.

Led jointly by new backers Dawn Capital and Tiger Global Management, the round also had participation from past investors Mike Chalfen, Boldstart Ventures, Crane Venture Partners, Backed and Seedcamp, alongside UiPath’s founder and CEO Daniel Dines and head of strategy Brandon Deer. Harbr has now raised over $50 million, and it’s not disclosing its valuation.

Harbr has been around since 2017, but it only came out of stealth mode earlier this year, in May. Its approach has mirrored that of a lot of other enterprise startups that spend a long time building their product under wraps. Identifying the market opportunity when it was still nascent, Harbr then worked directly (and quietly) with enterprises to figure out what they needed and build it, before launching it as a commercial product (with customers already in hand).

“Back in 2017 no one was talking about enterprise data exchanges,” Harbr’s CSO Anthony Cosgrove (who co-founded the company with Gary Butler, the CEO) told me in an interview. “So we worked with big companies to understand their needs and built Harbr based on that.”

Customers include those in financial and enterprise services such as Moody’s Analytics and WinterCorp, as well as governments. Cosgrove noted that nearly 100% of Harbr’s clients are in the US, where the startup’s chairman Leo Spiegel is based. Spiegel is also an investor, with an extensive enterprise data services resume to his name.

“This is a team that has worked together for a long time,” Spiegel said in an interview. “Gary [the CEO] and I have worked together for 20 years before Harbr. I have been in data a very long time, and we have a lot of relationships with US companies.” (That is one sign of why this enterprise startup has raised a substantial amount of funding so early in its public life.)

Cosgrove, an MBE, himself has a background in banking and before that UK government.

The platform today provides enterprises with a way to tap into data that an organization may already have in data lakes and warehouses, which it already uses for analytics and business intelligence. The idea is to make that data ready and secure for enterprise data exchange, either with other parts of your own large organization, or with third parties. The involves creating a “clean room”, providing tools for making it accessible by third parties, and potentially turning it into a data marketplace if that is your goal. 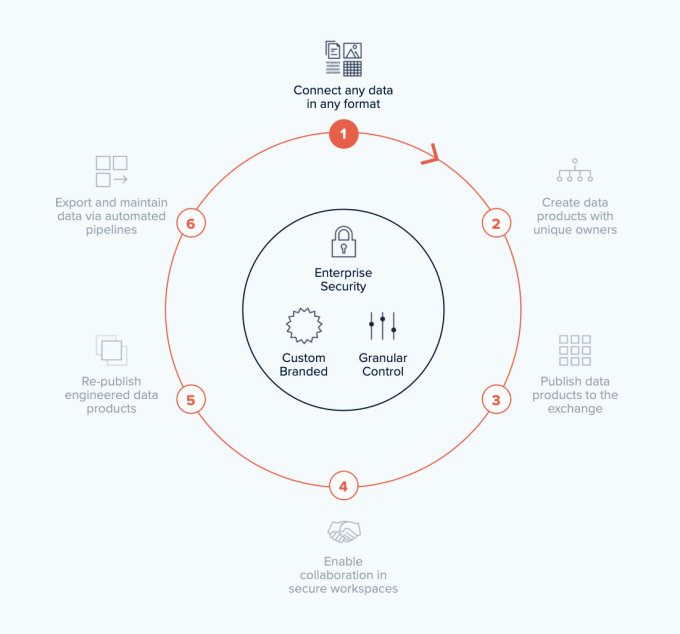 The challenges that Harbr addresses come from a couple of different angles. The first of these is technical: putting data troves from disparate sources into a format that can be usable by others. The second of these is commercial: creating something that you can then provide to others, but also making that marketplace findable and usable. The third of these is security.

Cosgrove said that he doesn’t think of Harbr as a security company first, but he points out that these days this has become as much of a concern (if not more) than simply making a data product usable. Being able to protect your data as valuable IP is important, but on top of that, you have the roles of privacy and data protection.

These have moved from being fringe concerns to a priority for many users, and, in an increasing number of cases, a legal requirement. So, as companies look for ways to tap into the big data opportunity while keeping those principles in mind, they are looking for companies built with privacy and data protection from the ground up.

“We’re really focused on helping people to treat data as a product. They bring assets into a platform and turn them into data products that are easy to consume, use and merge,” said Cosgrove. “We see security as a by-product of that: you have to consider security as part of it.” Harbr the name is a play on Harbor, which itself is a reference to safe harbor principles and regulations.

Harbr is not the only company looking at this opportunity. InfoSum, also out of the UK, is also tackling the concept of a privacy-first approach to federated data, providing a way to share data across organizations without compromising data protection in any way. DataFleets out of the Bay Area is also another startup also building a platform and tools to help enterprises with this challenge and opportunity.

“For data to become truly powerful, we need more automation and collaboration. Today, human efforts are consumed by finding and preparing data, rather than focused on high-value activities that drive real productivity gains,” said Evgenia Plotnikova, partner at Dawn Capital, in a statement. “Harbr is in the vanguard of companies changing this reality, and we are incredibly excited to be partnering with them. Customers we’ve spoken to find Harbr’s enterprise data exchange transformative, and their engagement across Fortune 1000 companies substantiates this.”