If you’ve ever been in a pointless meeting at work, odds are you’ve spent part of the time responding to messages or just putzing around on the Internet — but Klaxoon hopes to convert that into something a bit more productive with more interactive meetings.

The French startup today said it’s raised $50 million in a new financing round led by Idinvest Partners, with early round investors BPI, Sofiouest, Arkea and White Star Capital Fund also participating. The company offers a suite of tools designed to make those meetings more engaging and generally just cut down on useless meetings with a room of bored and generally unengaged people that might be better off working away at their desk or even taking other meetings. The company has raised about $55.6 million in total.

The whole point of Klaxoon is to make meetings more engaging, and there are a couple ways to do that. The obvious point is to translate what some classrooms are doing in the form of making the whole session more engaging with the use of connected devices. You might actually remember those annoying clickers in classrooms used to answer multiple choice questions throughout a session, but it is at least one way to engage people in a room — and offering a more robust way of doing that may be something that helps making the session as a whole more productive. 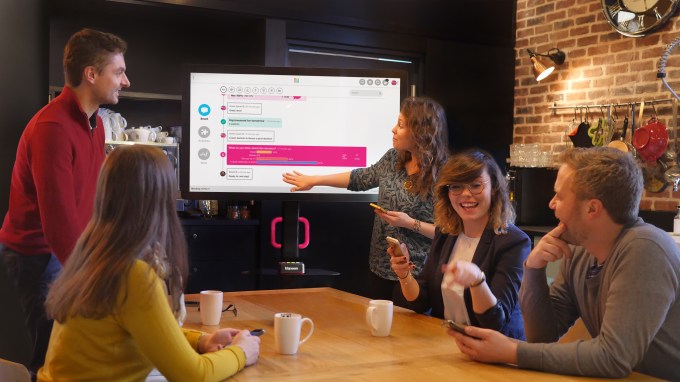 Klaxoon also offers other tools like an interactive whiteboard (remember Smartboards, also in classrooms?) as well as a closed networks for meeting participants that aims to be air-gapped from a broader network so those employees can conduct a meeting in private or if the room isn’t available. All this is wrapped together with a set of analytics to help employees — or managers — better conduct meetings and generally be more productive. All this is going to be more important going forward as workplaces become more distributed, and it may be tempting to just have a virtual meeting on one screen while either working on a different one — or just messing around on the Internet.

Of course, lame meetings are a known issue — especially within larger companies. So there are multiple interpretations of ways to try to fix that problem, including Worklytics — a company that came out of Y Combinator earlier this year — that are trying to make teams more efficient in general. The idea is that if you are able to reduce the time spent in meetings that aren’t really productive, that’ll increase the output of a team in general. The goal is not to monitor teams closely, but just find ways to encourage them to spend their time more wisely. Creating a better set of productivity tools inside those meetings is one approach, and that’s what Klaxoon seems to hope is the one that plays out.