The Pentagon’s $10 billion JEDI cloud contract bidding process has drawn a lot of attention. Earlier this month, Google withdrew, claiming ethical considerations. Amazon’s Jeff Bezos responded in an interview at Wired25 that he thinks that it’s a mistake for big tech companies to turn their back on the US military. Microsoft president Brad Smith agrees.

In a blog post today, he made clear that Microsoft intends to be a bidder in government/military contracts, even if some Microsoft employees have a problem with it. While acknowledging the ethical considerations of today’s most advanced technologies like artificial intelligence, and the ways they could be abused, he explicitly stated that Microsoft will continue to work with the government and the military.

“First, we believe in the strong defense of the United States and we want the people who defend it to have access to the nation’s best technology, including from Microsoft,” Smith wrote in the blog post.

To that end, the company wants to win that JEDI cloud contract, something it has acknowledged from the start, even while criticizing the winner-take-all nature of the deal. In the blog post, Smith cited the JEDI contract as an example of the company’s desire to work closely with the U.S. government.

“Recently Microsoft bid on an important defense project. It’s the DOD’s Joint Enterprise Defense Infrastructure cloud project – or “JEDI” – which will re-engineer the Defense Department’s end-to-end IT infrastructure, from the Pentagon to field-level support of the country’s servicemen and women. The contract has not been awarded but it’s an example of the kind of work we are committed to doing,” he wrote.

He went on, much like Bezos, to wrap his company’s philosophy in patriotic rhetoric, rather than about winning lucrative contracts. “We want the people of this country and especially the people who serve this country to know that we at Microsoft have their backs. They will have access to the best technology that we create,” Smith wrote. 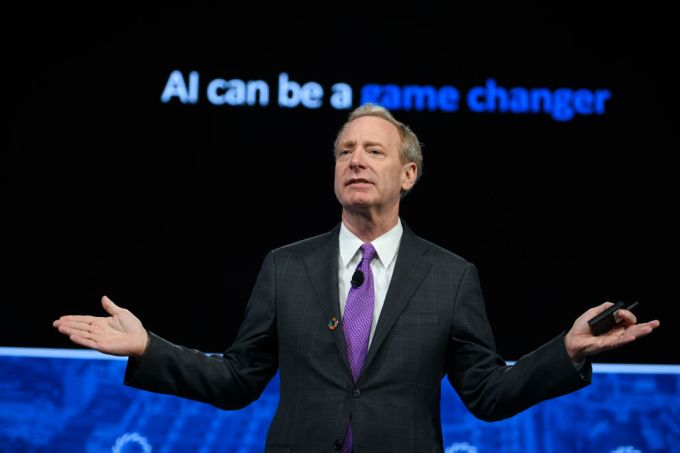 Throughout the piece, Smith continued to walk a fine line between patriotic duty to support the US military, while carefully conceding that there will be different opinions in a large and diverse company population (some of whom aren’t US citizens). Ultimately, he believes that it’s critical that tech companies be included in the conversation when the government uses advanced technologies.

“But we can’t expect these new developments to be addressed wisely if the people in the tech sector who know the most about technology withdraw from the conversation,” Smith wrote.

Like Bezos, he made it clear that the company leadership is going to continue to pursue contracts like JEDI, whether it’s out of a sense of duty or economic practicality or a little of both — whether employees agree or not.