Neo4j has helped popularize the graph database. Today it was rewarded with an $80 million Series E to bring their products to a wider market in what could be the company’s last private fundraise.

The round was led by One Peak Partners and Morgan Stanley Expansion Capital with participation from existing investors Creandum, Eight Roads and Greenbridge Partners. Today’s investment exactly doubles their previous amount bringing the total raised to $160 million.

Neo4j founder and CEO Emil Eifrem didn’t want to discuss valuation, calling it essentially a vanity metric. “We’re not sharing that. I never understood that. It’s just weird bragging rights. It makes no sense to customers, and makes no sense to anyone,” he said referring to the valuation. 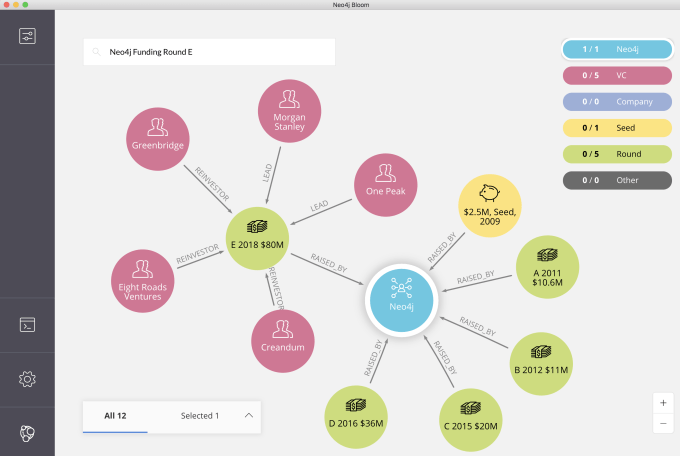 When you bring a company like Morgan Stanley on as an investor, it could be interpreted as a kind of signal that the company is thinking ahead to going public. While Eifrem wasn’t ready to commit to anything, he suggested that this is very likely the last time he raises funds privately. He says that he doesn’t like to think in terms of how he will exit so much as building a good company and seeing where that takes him. “If your mental framework is around building a great company, you’re going to have all kinds of options along the way. So that’s what I’m completely focused on,” Eifrem explained.

In 2016, when his company got a $36 million Series D investment, Eifrem says that they were working to expand in the enterprise. They have been successful with around 200 enterprise customers to their credit including Walmart, UBS, IBM and NASA. He says their customers include 20 of the top 25 banks and 7 of the top 10 retailers.

Two common graph database use case examples are the social graph on a social site like Facebook, which lets you see the connections between you and your friends or the purchase graph on an Ecommerce site like Amazon which lets you see if you bought one product, chances are you’ll also be interested in these others (based on your purchase history and what other consumers have done who have bought similar products).

Eifrem wants to use the money to expand the company internationally and provide localized service in terms of language and culture wherever their customers happen to be. As an example, he says today European customers might get an English speaking customer service agent if they called in for help. He wants to provide service and the website in the local language and the money should help accomplish that.

Neo4j was founded in 2007 as an open source project. Companies and individuals can still download the base product for free, but the company has also built a successful and growing commercial business on top of that open source project. With an $80 million runway, the next stop could be Wall Street.