Consider that there are millions of Okta users out there using the service to sign into their company applications with a single set of credentials. Yet getting customers to work together using Okta authentication was an enormous task for developers. Okta wanted to simplify it, so they created a service they are calling it ‘Sign in with Okta.’

The new API allows developers to add a few lines code and give Okta customers the ability to sign into one another’s websites in a similar way that OAuth allows you to use your Google or Facebook credentials to sign onto consumer sites.

Frederic Kerrest, COO and co-founder at Okta, says the ‘Sign in with Okta’ uses an extension of OAuth called OpenID Connect, which his company has been supporting since 2016. He says the new service gives customers the ability to expand the use of their Okta credentials beyond their own set of internal applications to sign into customer and partner sites. This extends the Okta functionality and brand and helps to make it a kind of standard way of logging in (or that’s the hope).

When developers add this functionality, the user sees a “Sign in with Okta” button on the website or service they are accessing. They can then use their Okta login to get into these sites under whatever rules the site owner has defined. 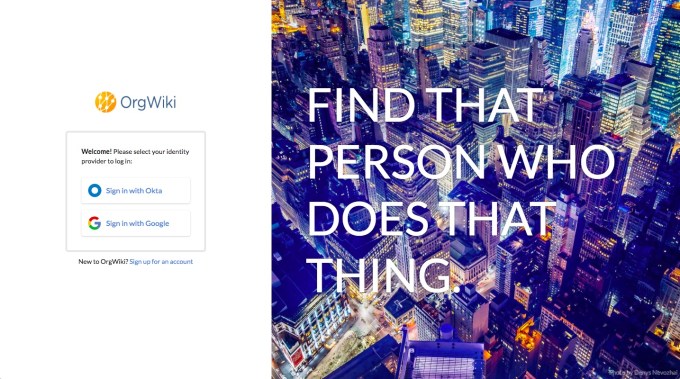 Site with ‘Sign in with Okta’ button. Photo: Okta

While Okta has provided APIs for developers prior to today, they didn’t provide a package like this that simplifies the process. This forced developers to use the SAML standard to make it work. While there’s nothing wrong with this approach, it can be time-consuming and put a lot of burden on developers to write software and connectors, while updating and maintaining them, Kerrest explained. This removes all of that complexity from the process.

This means that when two businesses are on Okta, they can trust one another because they do business together, and instead of setting up the SAML connection, a process that could take days, they can do it an hour with the Okta API tool, according to Kerrest.

“[Sign in with Okta] is a much easier way for customers or partners to seamlessly integrate into our environment. They could do it before, but we are ‘widgetizing’ it now,” he said.