As we increasingly hear about automation, artificial intelligence and robots taking away industrial jobs, Parsable, a San Francisco-based startup sees a different reality, one with millions of workers who for the most part have been left behind when it comes to bringing digital transformation to their jobs.

Parsable has developed a Connected Worker platform to help bring high tech solutions to deskless industrial workers who have been working mostly with paper-based processes. Today, it announced a $40 million Series C cash injection to keep building on that idea.

The round was led by Future Fund with help from B37 and existing investors Lightspeed Venture Partners, Airbus Ventures and Aramco Ventures. Today’s investment brings the total to nearly $70 million.

The Parsable solution works on almost any smartphone or tablet and is designed to enter information while walking around in environments where a desktop PC or laptop simply wouldn’t be practical. That means being able to tap, swipe and select easily in a mobile context. 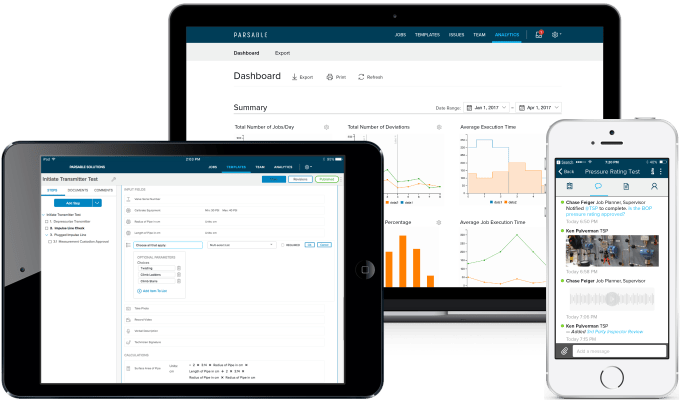 The challenge the company faced was the perception these workers didn’t deal well with technology. Parsable CEO Lawrence Whittle says the company, which launched in 2013, took its time building its first product because it wanted to give industrial workers something they actually needed, not what engineers thought they needed. This meant a long period of primary research.

The company learned, it had to be dead simple to allow the industry vets who had been on the job for 25 or more years to feel comfortable using it out of the box, while also appealing to younger more tech-savvy workers. The goal was making it feel as familiar as Facebook or texting, common applications even older workers were used to using.

“What we are doing is getting rid of [paper] notebooks for quality, safety and maintenance and providing a digital guide on how to capture work with the objective of increasing efficiency, reducing safety incidents and increasing quality,” Whittle explained.

He likens this to the idea of putting a sensor on a machine, but instead they are putting that instrumentation into the hands of the human worker. “We are effectively putting a sensor on humans to give them connectivity and data to execute work in the same way as machines,” he says.

The company has also made the decision to make the platform flexible to add new technology over time. As an example they support smart glasses, which Whittle says accounts for about 10 percent of its business today. But the founders recognized that reality could change and they wanted to make the platform open enough to take on new technologies as they become available.

Today the company has 30 enterprise customers with 30,000 registered users on the platform. Customers include Ecolab, Schlumberger, Silgan and Shell. They have around 80 employees, but expect to hit 100 by the end of Q3 this year, Whittle says.