Pulumi, a Seattle-based startup that lets developers specify and manage their cloud infrastructure using the programming language they already know, today announced that it has raised a $15 million Series A funding round led by Madrona Venture Group. Tola Capital also participated in this round and Tola managing director Sheila Gulati will get a seat on the Pulumi board, where she’ll join former Microsoft exec and Madrona managing director S. Somasegar.

In addition to announcing its raise, the company also today launched its commercial platform, which builds upon Pulumi’s open-source work.

“Since launch, we’ve had a lot of inbound interest, both on the community side — so you’re seeing a lot of open source contributions, and they’re really impactful contributions, including, for example, community-led support for VMware and OpenStack,” Pulumi co-founder and CEO Eric Rudder told me. “So we’re actually seeing a lot of vibrancy in the open-source community. And at the same time, we have a lot of inbound interest on the commercial side of things. That is, teams wanting to operationalize Pulumi and put it into production and wanting to purchase the product.” 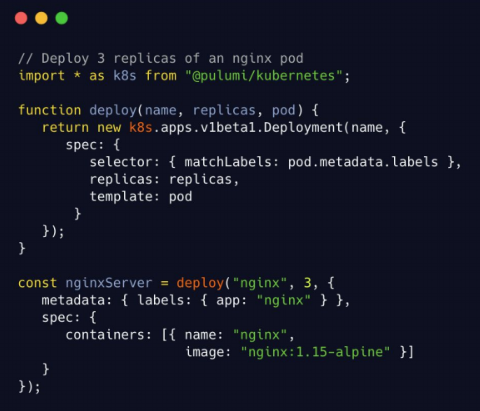 So to meet that opportunity, the team decided to raise a new round to scale out both its team and product. And now, that product includes a commercial offering of Pulumi with the company’s new ‘team edition.’ This new enterprise version includes support for unlimited users, integrations with third-party tools like GitHub and Slack, as well as role-based access controls and onboarding and 12×5 support. Like the free, single-user community edition, the team edition is delivered as a SaaS product and supports deployments to all of the major public and private cloud platforms.

“We’re all seeing the same things — the cloud is a foregone conclusion,” Tola’s Gulati told me when I asked her why she was investing in Pulumi. “Enterprises have a lot of complexity as they come over the cloud. And so dealing with VMs, containers and serverless is a reality for these enterprises. And the ability to do that in a way that there’s a single toolset, letting developers use real programming languages, letting them exist where they have skills today, but then allows them to bring the best of cloud into their organization. Frankly, Pulumi really has thought through the existing complexity, the developer reality, the IT and develop a relationship from both a runtime and deployment perspective. And they are the best that we’ve seen.”

Pulumi will, of course, continue to develop its open source tools, too. Indeed, the company noted that it would invest heavily in building out the community around its tools. The team told me that it is already seeing a lot of momentum but with the new funding, it’ll re-double its efforts.

With the new funding, the company will also work on making the onboarding process much easier, up to the point where it will become a full self-serve experience. But that doesn’t work for most large organizations, so Pulumi will also invest heavily in its pre- and post-sales organization. Right now, like most companies at this stage, the team is mostly comprised of engineers.

Pulumi wants to let you manage your infrastructure with code