Robin Powered, a startup looking to help offices run better, has today announced the close of a $20 million Series B funding. The round was led by Tola Capital, with existing investors Accomplice and FirstMark participating in the round, along with a new strategic Allegion Ventures.

Robin started as part of an agency called One Mighty Roar, where Robin Powered cofounder Sam Dunn and his two cofounders built out RFID and beacon tech for clients’ live events. In 2014, they spun out the tech as Robin and tweaked the focus on the modern office.

The office stands to be one of the least efficient pieces of any business. As a company grows, or even if it doesn’t, it’s particularly difficult to understand the ‘inventory’ of the office and how it is used by workers throughout the day.

“Before, if I asked you what you needed out of your next office, you might go around and survey employees or hire an architecture firm,” said Dunn. “I heard a story where a manager sent around an intern every Thursday at 3pm to talk to employees about the office, and that was one of two pieces of information handed over to the architecture firm. At the end of the day, it’s hard to know if there’s a shortage of meeting rooms, or teleconference-enabled rooms, or collaborative workspaces.” 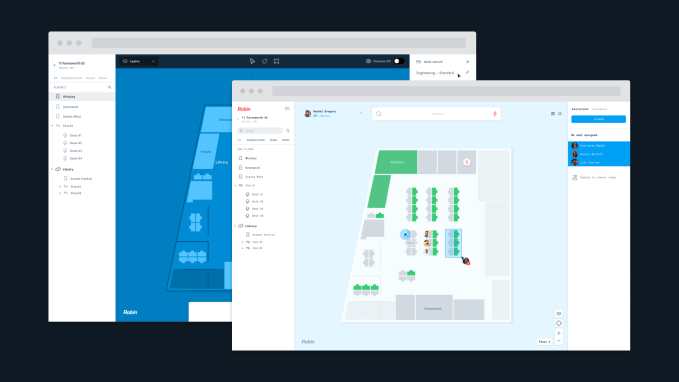 That’s where Robin comes in. Robin hooks into Google Calendar and Outlook to help employees get a sense of what meeting rooms and activity spaces are available in the office, complete with tablet signage out front. Meetings are the starting point for Robin, but the company can also offer tools for seating charts and office maps, as well as insights. The company wants to offer insights about how the space in this or that office is being used — what they lack and what they have too much of.

Robin charges its clients per room ($300) and per desk ($24 – $60). The hope is to build out the same technological backbone for clients’ offices as WeWork provides alongside its physical space, giving every business the opportunity to optimize one of their biggest investments: the office itself.

Robin has raised a total of $30 million.