Slack announced today that it is launching Enterprise Key Management (EKM) for Slack, a new tool that enables customers to control their encryption keys in the enterprise version of the communications app. The keys are managed in the AWS KMS key management tool.

Geoff Belknap, chief security officer (CSO) at Slack, says that the new tool should appeal to customers in regulated industries, who might need tighter control over security. “Markets like financial services, health care and government are typically underserved in terms of which collaboration tools they can use, so we wanted to design an experience that catered to their particular security needs,” Belknap told TechCrunch.

Slack currently encrypts data in transit and at rest, but the new tool augments this by giving customers greater control over the encryption keys that Slack uses to encrypt messages and files being shared inside the app.

He said that regulated industries in particular have been requesting the ability to control their own encryption keys including the ability to revoke them if it was required for security reasons. “EKM is a key requirement for growing enterprise companies of all sizes, and was a requested feature from many of our Enterprise Grid customers. We wanted to give these customers full control over their encryption keys, and when or if they want to revoke them,” he said. 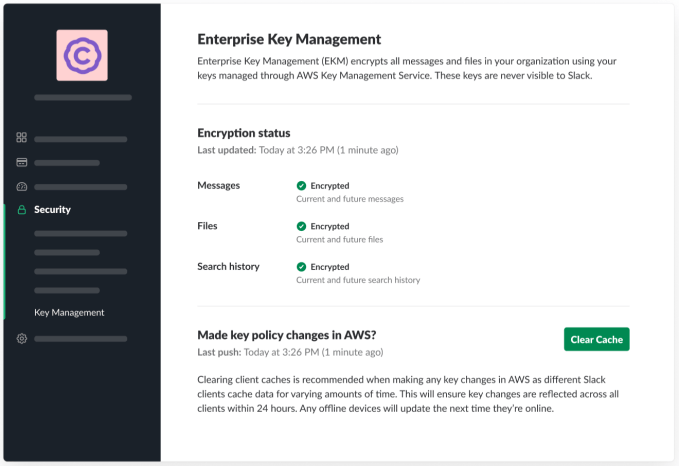 Belknap says that this is especially important when customers involve people outside the organization such as contractors, partners or vendors in Slack communications. “A big benefit of EKM is that in the event of a security threat or if you ever experience suspicious activity, your security team can cut off access to the content at any time if necessary,” Belknap explained.

In addition to controlling the encryption keys, customers can gain greater visibility into activity inside of Slack via the Audit Logs API. “Detailed activity logs tell customers exactly when and where their data is being accessed, so they can be alerted of risks and anomalies immediately,” he said. If a customer finds suspicious activity, it can cut off access.

EKM for Slack is generally available today for Enterprise Grid customers for an additional fee. Slack, which announced plans to go public last month, has raised over $1 billion on a $7 billion valuation.

Someone could scoop up Slack before it IPOs