As the global agricultural industry stretches to meet expected population growth and food demand, and food security becomes more of a pressing issue with global warming, a startup out of South Africa is using artificial intelligence to help farmers manage their farms, trees, and fruits.

Aerobotics is a South African startup that provides intelligent tools to the world’s agriculture industry. It raised $17 million in an oversubscribed Series B round.

Founded in 2014 by James Paterson and Benji Meltzer, Aerobotics is currently focused on building tools for fruit and tree farmers. Using artificial intelligence, drones and other robotics, its technology helps track and assess the health of these crops, including identifying when trees are sick, tracking pests and diseases, and analytics for better yield management.

The company has progressed its technology and provides independent and reliable yield estimations and harvest schedules to farmers by collecting and processing both tree and fruit imagery from citrus growers early in the season. In turn, farmers can prepare their stock, predict demand, and ensure their customers have the best quality of produce.

Aerobotics has experienced record growth in the last few years. For one, it claims to have the largest proprietary data set of trees and citrus fruit in the world having processed 81 million trees and more than a million citrus fruit.

The seven-year-old startup is based in Cape Town, South Africa. At a time when many of the startups out of the African continent have focused their attention primarily on identifying and fixing challenges at home, Aerobotics has found a lot of traction for its services abroad, too. It has offices in the U.S., Australia, and Portugal — like Africa, home to other major, global agricultural economies — and operates in 18 countries across Africa, the Americas, Europe, and Australia. 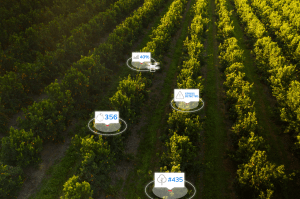 The company said it plans to use this Series B investment to continue developing more technology and product delivery, both for the U.S. and other markets.

“We’re committed to providing intelligent tools to optimize automation, minimize inputs and maximize production. We look forward to further co-developing our products with the agricultural industry leaders,” said Paterson, the CEO in a statement.

Once heralded as a frontier for technology centuries ago, the agriculture industry has stalled in that aspect for a long while. However, agritech companies like Aerobotics that support climate-smart agriculture and help farmers have sprung forth trying to take the industry back to its past glory. Investors have taken notice and over the past five years, investments have flowed with breathtaking pace.

For Aerobotics, it raised $600,000 from 4Di Capital and Savannah Fund as part of its seed round in September 2017. The company then raised a further $4 million in Series A funding in February 2019, led by Nedbank Capital and Paper Plane Ventures.

Naspers Foundry, the lead investor in this Series B round, was launched by Naspers in 2019 as a 1.4 billion rand (~$100 million) fund for tech startups in South Africa.

Phuthi Mahanyele-Dabengwa, CEO of Naspers South Africa said of the investment, “Food security is of paramount importance in South Africa and the Aerobotics platform provides a positive contribution towards helping to sustain it. This type of tech innovation addresses societal challenges and is exactly the type of early-stage company that Naspers Foundry looks to back.”