While smaller companies are seeing a lot of new options for distributed office space, or can pick up a couple offices in a WeWork, eventually they get big enough and have to find a bigger office — but that can end up as one of the weirdest and most annoying challenges for an early-stage CEO.

Finding that space is a whole other story, outside of just searching on Google and crossing your fingers. It’s why Jonathan Wasserstrum started Squarefoot, which looks to not only create a hub for these vacant offices, but also have the systems in place — including brokers — to help companies eventually land that office space. Eventually companies as they grow have to graduate into increasingly larger and larger spots, but there’s a missing sweet spot for mid-stage companies that are looking for space but don’t necessarily have the relationships with those big office brokers just yet, and instead are just looking through a friend of a friend. The company said today that it has raised $7 million in a new financing round led by Rosecliff Ventures, with RRE Ventures, Triangle Peak Partners, Armory Square Ventures, and others participating.

“If you talk to any CEO and you ask what they think about commercial real estate brokers, they’ll say, ‘oh, the guys that send an email every week,’” co-founder Jonathan Wasserstrum said. “The industry has been slow to adopt because the average person who owns the building is fine. They don’t wake up every morning and say this process sucks. But the people who wake up and say the process sucks are looking for space. That was kind of one fo the early things that we kind of figured out and focused a lot of attention on aggregating that tenant demand.

Squarefoot starts off on the buyer side as an aggregation platform that localizes open office space into one spot. While companies used to have to Google search something along the lines of “Chelsea office space” in New York — especially for early-stage companies that are just starting to outgrow their early offices — the goal is to always have Squarefoot come up as a result for that. It already happens thanks to a lot of efforts on the marketing front, but eventually with enough inventory and demand the hope is that building owners will be coming to Squarefoot in the first place. (That you see an ad for Squarefoot as a result for a lot of these searches already is, for example, no accident.) 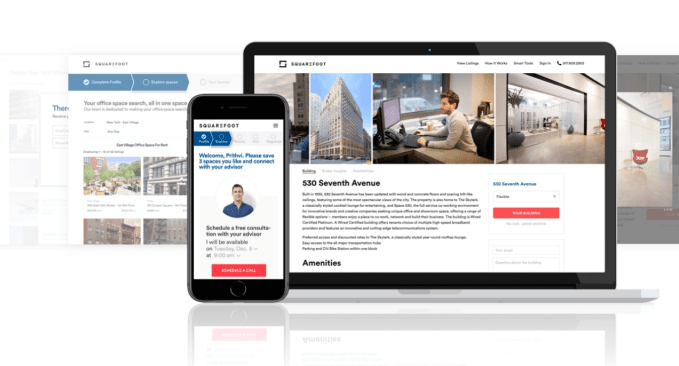 Squarefoot is also another company that is adopting a sort of hybrid model that includes both a set of tools and algorithms to aggregate together all that space into one spot, but keep consultants and brokers in the mix in order to actually close those deals. It’s a stance that the venture community seems to be increasingly softening on as more and more companies launch with the idea that the biggest deals need to have an actual human on the other end in order to manage that relationship.

“We’re not trying to remove brokers, we have them on staff, we think there’s a much better way to go through the process,” Wasserstrum said. “When I am buying a ticket to Chicago, I’m fine going to Kayak and I don’t need a travel agent. But when I’m the CEO of a company and about to sign a three-year lease that’s a $1.5 million liability, and I’ve never done this before, shouldn’t I want someone to help me out? I do not see in the near future this e-commerce experience for commercial real estate. You don’t put it in your shopping cart.”

And, to be sure, there are a lot of platforms that already focus on the consumer side, like Redfin for home search. But this is a big market, and there already is some activity — it just hasn’t picked up a ton of traction just yet because it is a slog to get everything all in one place. One of the original examples is 42Floors, but even then that company early on faced a lot of troubles trying to get the model working and in 2015 cut its brokerage team. That’s not a group of people Wasserstrum is looking to leave behind, simply because the end goal is to actually get these companies signing leases and not just serving as a search engine.