Site reliability engineering platform Blameless announced Tuesday it raised $30 million in a Series B funding round, led by Third Point Ventures with participation from Accel, Decibel and Lightspeed Venture Partners, to bring total funding to over $50 million.

Blameless, based in San Mateo, California, emerged from stealth in 2019 after raising both a seed and Series A round, totaling $20 million. Since then, it has turned its business into a blossoming software platform.

Blameless’ platform provides the context, guardrails and automated workflows so engineering teams are unified in the way they communicate and interact, especially to resolve issues quicker as they build their software systems.

It originally worked with tech-forward teams at large companies, like Home Depot, that were “dipping [their toes] into the space and now [want] to double down,” co-founder and CEO Lyon Wong told TechCrunch.

The company still works with those tech-forward teams, but in the past two years, more companies sought out resident SRE architect Kurt Anderson to advise them, causing Blameless to change up its business approach, Wong said.

Other companies are also seeing a trend of customers asking for support — for example, in March, Google Cloud unveiled its Mission Critical Services support option for SRE to serve in a similar role as a consultant as companies move toward readiness with their systems. And in February, Nobl9 raised a $21 million Series B to provide enterprises with the tools they need to build service-level-objective-centric operations, which is part of a company’s SRE efforts.

Blameless now has interest from more mainstream companies in the areas of enterprise, logistics and healthcare. These companies aren’t necessarily focused on technology, but see a need for SRE.

“Companies recognize the shortfall in reliability, and then the question they come to us with is how do they get from where they are to where they want to be,” Anderson said. “Often companies that don’t have a process respond with ‘all hands on deck’ all the time, but instead need to shift to the right people responding.”

Lyon plans to use the new funding to fill key leadership roles, the company’s go-to-market strategy and product development to enable the company to go after larger enterprises.

Blameless doubled its revenue in the last year and will expand to service all customer segments, adding small and emerging businesses to its roster of midmarket and large companies. The company also expects to double headcount in the next three quarters.

“Freeing up engineering to focus on shipping code is exactly what Blameless achieves,” said Moskowitz in a written statement. “The Blameless market opportunity is big as we see teams struggle and resort to creating homegrown playbooks and point solutions that are incomplete and costly.” 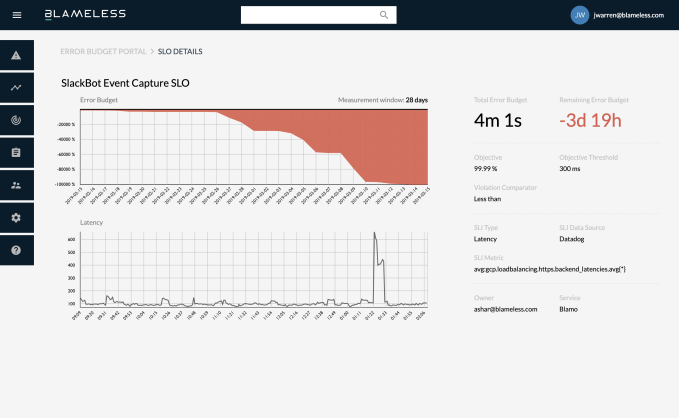