Cisco announced today that it was open sourcing the MindMeld conversation AI platform, making it available to anyone who wants to use it under the Apache 2.0 license.

MindMeld is the conversational AI company that Cisco bought in 2017. The company put the technology to use in Cisco Spark Assistant later that year to help bring voice commands to meeting hardware, which was just beginning to emerge at the time.

Today, there is a concerted effort to bring voice to enterprise use cases, and Cisco is offering the means for developers to do that with the MindMeld tool set. “Today, Cisco is taking a big step towards empowering developers with more comprehensive and practical tools for building conversational applications by open-sourcing the MindMeld Conversational AI Platform,” Cisco’s head of machine learning Karthik Raghunathanw wrote in a blog post.

The company also wants to make it easier for developers to get going with the platform, so it is releasing the Conversational AI Playbook, a step-by-step guide book to help developers get started with conversation-driven applications. Cisco says this is about empowering developers, and that’s probably a big part of the reason.

But it would also be in Cisco’s best interest to have developers outside of Cisco working with and on this set of tools. By open sourcing them, the hope is that a community of developers, whether Cisco customers or others, will begin using, testing and improving the tools; helping it to develop the platform faster and more broadly than it could, even inside an organization as large as Cisco.

Of course, just because they offer it doesn’t necessarily automatically mean the community of interested developers will emerge, but given the growing popularity of voice-enabled used cases, chances are some will give it a look. It will be up to Cisco to keep them engaged.

Cisco is making all of this available on its own DevNet platform starting today.

Voice interfaces beginning to find their way into business

With traditional CRM tools, sales people add basic details about the companies to the database, then a few notes about their interactions. AI has helped automate some of that, but Gong.io wants to take it even further using voice recognition to capture every word of every interaction. Today, it got a $40M Series B investment.

The round was led by Battery Ventures with existing investors Norwest Venture Partners, Shlomo Kramer, Wing Venture Capital, NextWorld Capital and Cisco Investments also participating. Battery general partner Dharmesh Thakker will join the startup’s Board under the terms of the deal. Today’s investment brings the total raised so far to $68 million, according to the company.

$40 million is a hefty Series B, but investors see a tool that has the potential to have a material impact on sales, or at least give management a deeper understanding of why a deal succeeded or failed using artificial intelligence, specifically natural language processing.

Company co-founder and CEO Amit Bendov says the solution starts by monitoring all customer-facing conversation and giving feedback in a fully automated fashion. “Our solution uses AI to extract important bits out of the conversation to provide insights to customer-facing people about how they can get better at what they do, while providing insights to management about how staff is performing,” he explained. It takes it one step further by offering strategic input like how your competitors are trending or how are customers responding to your products. 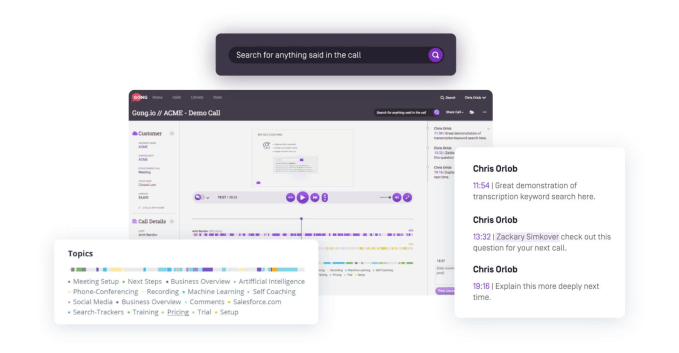 Bendov says he started the company because he has had this experience at previous startups where he wants to know more about why he lost a sale, but there was no insight from looking at the data in the CRM database. “CRM could tell you what customers you have, how many sales you’re making, who is achieving quota or not, but never give me the information to rationalize and improve operations,” he said.

The company currently has 350 customers, a number that has more than tripled since the end of 2017 when it had 100. He says it’s not only that it’s adding new customers, existing ones are expanding, and he says that there is almost zero churn.

Today, Gong has 120 employees with headquarters in San Francisco and a 55-person R&D team in Israel. Bendov expects the number of employees to double over the next year with the new influx of money to keep up with the customer growth.

Salespeople usually spend their days talking. They are on the phone and in meetings, but when it comes to updating Salesforce, they are back at the keyboard again typing notes and milestones, or searching for metrics about their performance. Today, Salesforce decided to change that by introducing Einstein Voice, a bit of AI magic that allows salespeople to talk to the program instead of typing.

In a world where Amazon Alexa and Siri make talking to our devices more commonplace in our non-work lives, it makes sense that companies are trying to bring that same kind of interaction to work.

In this case, you can conversationally enter information about a meeting, get daily briefings about key information on your day’s meetings (particularly nice for salespeople who spend their day in the car) and interact with Salesforce data dashboards by asking questions instead of typing queries.

All of these tools are designed to make life easier for busy salespeople. Most hate doing the administrative part of their jobs because if they are entering information, even if it will benefit them having a record in the long run, they are not doing their primary job, which is selling stuff.

For the meetings notes part, instead of typing on a smartphone, which can be a challenge anyway, you simply touch Meeting Debrief in the Einstein Voice mobile tool and start talking to enter your notes. The tool interprets what you’re saying. As with most transcription services, this is probably not perfect and will require some correcting, but should get you most of the way there.

It can also pick out key data like dates and deal amounts and let you set action items to follow up on.

Brent Leary, who is the founder and principal analyst at CRM Essentials says this is a natural progression for Salesforce as people get more comfortable using voice interfaces. “I think this will make voice-first devices and assistants as important pieces to the CRM puzzle from both a customer experience and an employee productivity perspective,” he told TechCrunch.

It’s worth pointing out that Tact.AI has been doing this for some time on top of Salesforce giving this type of voice interaction for Salesforce users. It’s likely ahead of Salesforce at this point, but Leary believes having Salesforce enter the voice arena will probably benefit the startup more than hurt it.

“The Salesforce tide will lift all boats, and companies like Tact will see their profile increased significantly because while Salesforce is the leader in the category, it’s share of the market is still less than 20% of the market,” he pointed out.

Typically, Salesforce starts with a small set of functionality and the builds on that over time. That’s very likely what they are doing here, coming out with a product announcement in time for Dreamforce, their massive customer conference next week,

The company has raised over $64 million since it emerged from the MIT Human Dynamics Lab back in 2007 trying to use the artificial intelligence technology available at the time to understand sentiment and apply it in a business context.

While it took some time for the technology to catch up with the vision, and find the right use case, company CEO and founder Joshua Feast says today they are helping customer service representatives understand the sentiment and emotional context of the person on the line and give them behavioral cues on how to proceed.

“We sell software to very large software, premium brands with many thousands of people in contact centers. The purpose of our solution is to help provide a really wonderful service experience in moments of truth,” he explained. Anyone who deals with a large company’s customer service has likely felt there is sometimes a disconnect between the person on the phone and their ability to understand your predicament and solve your problem. 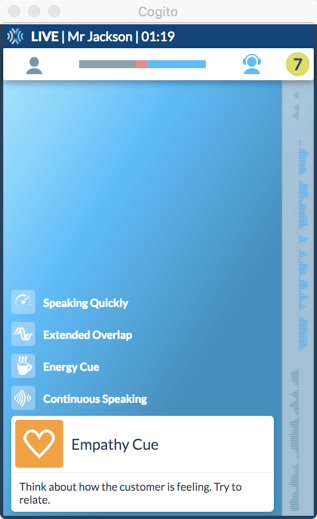 He says using his company’s solution, which analyzes the contents of the call in real time, and provides relevant feedback, the goal is to not just complete the service call, but to leave the customer feeling good about the brand and the experience. Certainly a bad experience can have the opposite effect.

He wants to use technology to make the experience a more human interaction and he recognizes that as an organization grows, layers of business process make it harder for the customer service representative to convey that humanity. Feast believes that technology has helped create this problem and it can help solve it too.

While the company is not talking about valuation or specific revenue at this point, Feast reports that revenue has grown 3X over the last year. Among their customers are Humana and Metlife, two large insurance companies, each with thousands of customer service agents.

Cogito is based in downtown Boston with 117 employees at last count, and of course they hope to use the money to add on to that number and help scale this vision further.

“This is about scaling our organization to meet client’s needs. It’s also about deepening what we do. In a lot of ways, we are only scratching the surface [of the underlying technology] in terms of how we can use AI to support emotional connections and help organizations be more human,” Feast said.