It seems that Sunday has become a popular day to announce large deals involving enterprise companies. IBM announced the $34 billion Red Hat deal two weeks ago. SAP announced its intent to buy Qualtrics for $8 billion last night, and Vista Equity Partners got into the act too, announcing a deal to buy Apptio for $1.94 billion, representing a 53 percent premium for stockholders.

Vista paid $38 per share for Apptio, a Seattle company that helps companies manage and understand their cloud spending inside a hybrid IT environment that has assets on-prem and in the cloud. The company was founded in 2007 right as the cloud was beginning to take off, and grew as the cloud did. It recognized that companies would have trouble understanding their cloud assets along side on-prem ones. It turned out to be a company in the right place at the right time with the right idea.

Investors like Andreessen Horowitz, Greylock and Madrona certainly liked the concept, showering the company with $261 million before it went public in 2016. The stock price has been up and down since, peaking in August at $41.23 a share before dropping down to $24.85 on Friday. The $38 a share Vista paid comes close to the high water mark for the stock. 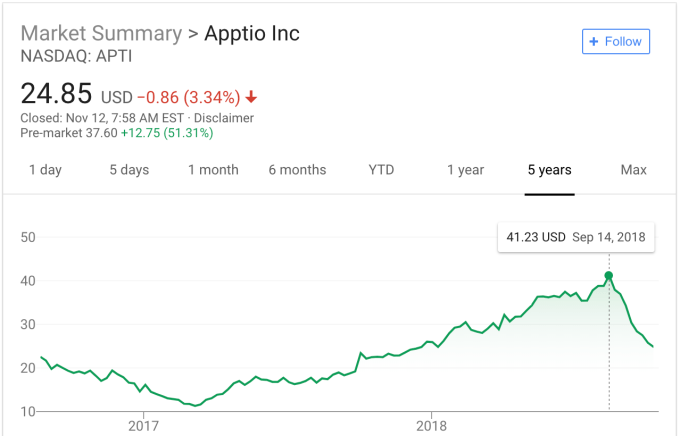 Sunny Gupta, co-founder and CEO at Apptio liked the idea of giving his shareholders a good return while providing a good landing spot to take his company private. Vista has a reputation for continuing to invest in the companies it acquires and that prospect clearly excited him. “Vista’s investment and deep expertise in growing world-class SaaS businesses and the flexibility we will have as a private company will help us accelerate our growth…,” Gupta said in a statement.

The deal was approved by Apptio’s board of directors, which will recommend shareholders accept it. With such a high premium, it’s hard to imagine them turning it down. If it passes all of the regulatory hurdles, the acquisition is expected to close in Q1 2019.

It’s worth noting that the company has a 30-day “go shop” provision, which would allow it to look for a better price. Given how hot the enterprise market is right now and how popular hybrid cloud tools are, it is possible it could find another buyer, but it could be hard to find one willing to pay such a high premium.

Vista clearly likes to buy enterprise tech companies having snagged Ping Identity for $600 million and Marketo for $1.8 billion in 2016. It grabbed Jamf, an Apple enterprise device management company and Datto, a disaster recovery company last year. It turned Marketo around for $4.75 billion in a deal with Adobe just two months ago.