Today WhatsApp launches its first revenue-generating enterprise product and the only way it currently makes money directly from its app. The WhatsApp Business API is launching to let businesses respond to messages from users for free for up to 24 hours, but will charge them a fixed rate by country per message sent after that.

Businesses will still only be able to message people who contacted them first, but the API will help them programatically send “shipping confirmations, appointment reminders or event tickets. Clients can also use it respond to manually respond to customer service inquiries through their own tool or apps like Zendesk or Twilio. And small businesses who are one of the 3 million users of the WhatsApp For Business app can still use it to send late replies one-by-one for free. 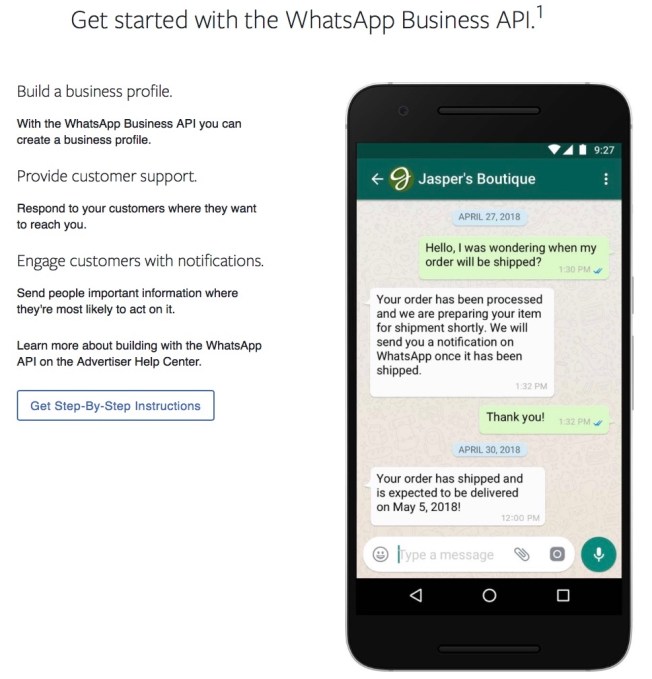 After getting acquired by Facebook for $19 billion in 2014, it’s finally time for the 1.5 billion-user WhatsApp to pull its weight and contribute some revenue. If Facebook can pitch the WhatsApp Business API as a cheaper alternative to customer service call centers, the convenience of asynchronous chat could compel users to message companies instead of phoning.

Only charging for slow replies after 24 hours since a user’s last message is a genius way to create a growth feedback loop. If users get quick answers via WhatsApp, they’ll prefer it other channels. Once businesses and their customers get addicted to it, WhatsApp could eventually charge for all replies or any that exceed a volume threshold, or cut down the free window. Meanwhile, businesses might be too optimistic about their response times and end up paying more often than the expect, especially when messages come in on weekends or holidays.

WhatsApp first announced it would eventually charge for enterprise service last September when it launched its free WhatsApp For Business app that now has 3 million users and remains free for all replies, even late ones.

Importantly, WhatsApp stresses that all messaging between users and businesses, even through the API, will be end-to-end encrypted. That contrasts with the Washington Post’s report that Facebook pushing to weaken encryption for WhatsApp For Business message is partly what drove former CEO Jan Koum to quit WhatsApp and Facebook’s board in April. His co-founder Brian Acton had ditched Facebook back in September and donated $50 million to the foundation of encrypted messaging app Signal.

Today WhatsApp is also formally launching its new display ads product worldwide. But don’t worry, they won’t be crammed into your chat inbox like with Facebook Messenger. Instead, businesses will be able to buy ads on Facebook’s News Feed that launch WhatsApp conversations with them…thereby allowing them to use the new Business API to reply. TechCrunch scooped that this was coming last September, when code in Facebook’s ad manager revealed the click-to-WhatsApp ads option, and the company confirmed the ads were in testing. Facebook launched similar click-to-Messenger ads back in 2015.

Finally, WhatsApp also tells TechCrunch its planning to run ads in its 450 million daily user Snapchat Stories clone called Status. “WhatsApp does not currently run ads in Status though this represents a future goal for us, starting in 2019. We will move slowly and carefully and provide more details before we place any Ads in Status” a spokesperson told us. Given WhatsApp Status is over twice the size of Snapchat, it could earn a ton on ads between Stories, especially if it’s willing to make some unskippable.

Together, the ads and API will replace the $1 per year subscription fee WhatsApp used to charge in some countries but dropped in 2016. With Facebook’s own revenue decelerating, triggering a 20 percent, $120 billion market cap drop in its share price, it needs to show it has new ways to make money now more than ever.