Adobe could be shopping for another piece of the digital marketing puzzle, as reports surfaced today that the company might be in talks with Vista Equity Partners to buy Marketo, a company the private equity firm purchased in May 2016 for $1.8 billion in cash. Reuters was first to report the rumor.

While the report states the talks are early, and nothing is imminent, and none of the companies involved would comment (understandably), it is a deal that makes sense for Adobe. The company has been trying to build out its digital marketing business for some time, including buying Magento in May for $1.8 billion to help beef up the ecommerce piece.

Assuming that Vista wants to flip Marketo for a profit, a good bet, it would likely need to come in at $2 billion at a minimum and probably more. There are only a few companies out there that could afford the price tag, who would be interested in a property like Marketo: Adobe, Salesforce, Microsoft, SAP and Oracle.

If Adobe really wanted to go for the digital marketing jugular, it could fork over the cash and buy Marketo. Brent Leary, who covers this industry as the principle at CRM Essentials, says this would be a way for Adobe to grab a chunk of enterprise marketing automation business at a time when the market is getting highly competitive.

“Marketo would give Adobe a leader in the marketing automation space at the enterprise customer level, particularly in the B2B space.” Leary explained.

While nothing is clear yet, Adobe has the resources if it wants to do it. The company currently has $6.3 billion in cash on hand, according to data on Yahoo finance, and has seen its stock price rise significantly in the last year from $156.24 to $269.58 (as of publication today). 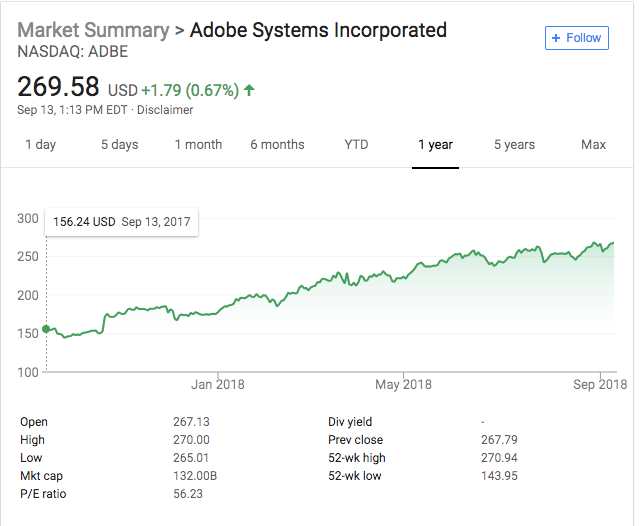 Adobe Creative Cloud has always been the primary money maker for Adobe over the years, generating $1.3 billion in the last report (pdf) in June out of $2.2 billion in total revenue. Digital Experience, which includes marketing products, generated $586 million, and although it’s trending up, it has so much more potential.

We have been seeing more M&A action in this space as companies try to fill in various parts of the sale-service-marketing triumvirate. Just last week, we saw Zendesk, the company that concentrates on cloud customer service, enter the sales automation and CRM part of the space with the purchase of Base. Earlier this month, Thoma Bravo bought Apttus, a company which covers the quote-to-cash part of the sales cycle.

Adobe finds itself competing with other giant organizations with the previously mentioned companies all lining up for a piece of the digital marketing business. Getting Marketo certainly has the potential to help push that Digital Experience revenue line up further as the fight for marketshare gets ever more intense. Whether that happens remains to be seen, but Marketo is certainly a company that would match up well with Adobe if it wanted to make such a move.

It’s worth mentioning that Adobe will be reporting its latest earnings next Thursday, September 18th.