AJ Brustein was out spending time with a member of his merchandising team when a nearby store ran out of stock of some goods — but there was no one on staff responsible for that location. Fortunately, the employee he was with had already showed him how to restock the shelves, and he offered to peel off and do it himself.

But that gap in the workforce may have just continued, leading directly to potential lost revenue for companies that sell products in those stores. That’s why Brustein and Yong Kim started Wonolo, a tool to connect companies with temporary workers in order to fill the unexpected demand those companies might face in those same out-of-stock situations. Wonolo employees sign up for the platform, and the companies that partner with the startup have an opportunity to grab the necessary workers they need on a more flexible basis. Wonolo today said it has raised $13 million in a new financing round led by Sequoia Capital, including existing investors PivotNorth and Crunchfund, and new investor Base10. Sequoia Capital’s Jess Lee is joining the company’s board of directors as part of the financing.

“There’s a big opportunity  helping people fill in their schedule with shifts,” Brustein said. “We really found there’s this huge untapped market of people who are looking for work who are underemployed. Let’s say Mary is a great worker and has a great job at the Home Depot, but no matter how good she, is she can only get 29 hours of work. It’s hard to manage schedules between different employers that want you to work the same hours. That’s the market we’ve really focused on, the underemployed market, which is a growing unfortunate trend in the U.S. That’s changed a little bit about the types of jobs we have on the platform.”

Wonolo is essentially looking to replace the typical temp agency experience, which helps workers find positions with companies that need a more limited amount of time. Meanwhile, those workers get an opportunity to fill in extra shifts that they might need for additional income on a more flexible schedule. Once a company posts a job to Wonolo, employees will get notified that it’s available and then get a chance to pick up those shifts, and when the job is approved those workers get paid right away. 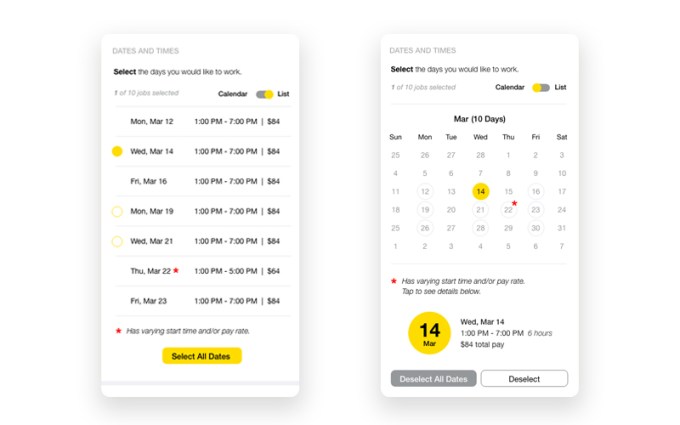 While the jobs that Wonolo is suited for are more along the lines of merchandising, events staff, or more general labor, the hope is that the service will also expose those employees to a variety of companies who may actually end up wanting to hire them at some point. It allows them to get a good snapshot of all the work that’s available, and theoretically would help offer them an additional step on a career path that could get them to a direct full-time job with any of the companies from which they might end up accepting jobs.

“We thought we could address [the idea of being able to deal with unpredictability] better than temp staffing, and we realized the antidote was flexibility on the worker side,” Brustein said. “We could match them with these jobs that would unpredictably pop up. When we dug into it, we realized flexibility was something that was just completely lacking for workers. We took a very different approach to the way that people will often recruit talent for staffing agencies or their own employees. We are looking at character traits.”

Wonolo was born out of Brustein and Kim’s experience at Coca-Cola, where they had an opportunity to work with a major brand for a number of years. After a while, they got an opportunity to start working on a more entrepreneurial project, and that’s when that whole merchandising scenario played out and prompted them to start working on Wonolo. That part about character traits is an important part for Wonolo, Brustein said — because as long as someone can complete a job, they don’t have to be an absolute expert, as long as they are there ready and good to go.

There are, of course, companies trying to create platforms for temporary workers, like TrueBlue, and Brustein said Wonolo will inevitably have to compete with more local players as it looks to expand. But the hope is that aiming to tap the same kind of flexibility that made Uber so popular for temporary staffers — and potentially that pathway to a big career opportunity — will be one that attracts them to their service.